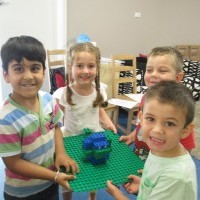 This morning we had a special incursion from Lego Bricks to work with the children to use Lego for purposeful construction at Bambino’s Kindergarten Fairwater. The Dragonflies were very excited all morning for the show. First we began to talk about Jungle 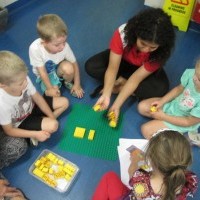 animals, to extend on our Jungle play during the letter of the week study on J that we did. Firstly we identified many different animals from the jungle – bear, snake, elephant, tiger. The ladies then asked the children who had seen a snake. The children put up their hands. We then sang a song about a jungle snake. The children identified that a snake slithers and has no arms and legs, they eat meat and we don’t touch them. The children were split into groups of four, given a box of Lego and some instructions. 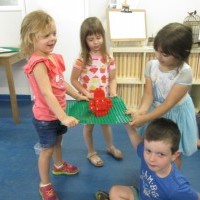 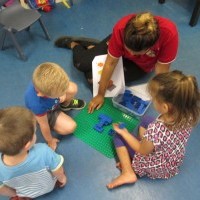 The Lego Bricks program focusses on the key learning areas of science, technology, engineering and maths. It encouraged the children to think critically using mathematical concepts to explore and extend their interests (LO4.1, LO4.2). Throughout the experience the children were building their problem-solving skills in conjunction with being providing an opportunity for creative expression and fostering an appreciation of how things work. They continued to develop critical thinking skills through design thinking processes. They explored maths and science concepts by utilising multiple learning modalities to engage visual, kinaesthetic and auditory learning styles.

Through taking turns and working collaboratively (LO1.3) the children continued to develop social and emotional skills such as patience, teamwork and communication in the process of completing a project in a non-competitive setting. The Lego Bricks session also worked at improving the children’s fine-motor skills as they manipulate small components and objects throughout the construction process (LO3.2). The children thoroughly enjoyed this incursion and are excited to use these skills to continue to build with the Lego!